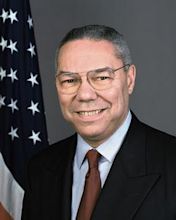 Colin Powell was the 10-year-old son of Jamaican immigrants in 1948 when President Harry S. Truman ordered the desegregation of America’s armed forces. As the 10-year-old boy would say 50 years later, “This isn’t ancient history; this is my generation.”

Racism was far from gone by the time Powell became an Army officer. But you wouldn’t have been able to tell by Powell’s meteoric career. After graduating from City College of New York with an ROTC commission as an Army second lieutenant, Powell became an Airborne Ranger and served two tours in Vietnam. His commands included a battalion, a brigade, and the Army’s V Corps, while his awards included two Presidential Medals of Freedom, the Defense Distinguished Service Medal (with three Oak Leaf Clusters), a Purple Heart, and numerous decorations from other countries — even British knighthood.

Colin Powell has spent much of his life inspiring many with his leadership skills and life experiences. Along with his wife, he began America’s Promise Alliance as part of their dedication to the well-being of children and youth of all socioeconomic levels to see that they get the resources they needed to succeed.

Later serving as National Security Adviser during the Reagan administration and Chairman of the Joint Chiefs of Staff, Powell became the Secretary of State under George W, Bush in 2000 and served his country with distinction.

His commitment to children, the military and his country serves as an ongoing inspiration to many in their path through life. His dedication to God and country are legendary.

For more on Colin Powell, go to History.com

Go to www.TADPGS.com, click on the “Looking for People” tab, then view “Veterans Solutions”. To see more information for Veterans, please join our LinkedIn group, Veterans Hiring Solutions for Veterans at http://linkd.in/Sg346w. If you have specific questions, contact me at  [email protected]ccona.com.