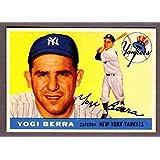 “I sit and I thank the good lord I was in the Navy. We ate good, clean clothes, clean bed. You see some of these Army men, what they went through, that’s the one I felt for.”

Son of Italian immigrants Pietro and Paolina Berra, Lawrence Peter Berra grew up in St. Louis in an Italian neighborhood called “The Hill.” His parents didn’t know anything about baseball, but the local American Legion league set him on a path that would take him to the Hall of Fame. It was during his years in the American Legion that he earned the nickname Yogi when his friend, Bobby Hofman, said he looked like a Hindu yogi because of the way he sat with his arms and legs crossed when waiting to bat.

When Yogi turned 18, he put his baseball career on pause and joined the Navy in 1943. Trained as a gunner’s mate, Yogi worked on a rocket launching boat and served on D-Day. He said about the invasion that “Being a young guy, you didn‘t think nothing of it until you got in it. And so we went off 300 yards off beach. We protect the troops.” For the next twelve days his boat was ordered to shoot down enemy aircraft. They accidentally shot down an American plane, but managed to save the pilot. He went on to serve in a second assault on France for which he received a medal from the French government.

Sixty years later, he received the Lone Sailor award from the U.S. Navy Memorial, an honor given to sailors who use skills learned in the service to advance their careers. The president and Navy Memorial CEO said, “Our honorees are living examples of how service to country changes lives and helps develop leaders.”

Yogi’s career in baseball following World War II is among the most well-known. He played in fourteen World Series, won ten championships, and hit the first pinch-hit home run in World Series history. A fifteen-time All-Star, he was awarded MVP in 1951, 1954, and 1955. Yogi continued with the sport as a manager after the 1963 World Series.

After his retirement, Yogi remained active within the baseball community and as a public figure, recalling one of his most famous Yogi-isms, “It ain’t over till it’s over.” Yogi passed away on September 23, 2015, leaving behind fond memories for baseball fans everywhere, as well as a long a list of classic quips, including the following:

“I didn’t really say everything I said.”

“It’s deja vu all over again.”

“You can observe a lot by watching.”

“The future ain’t what it used to be.”

“I usually take a two hour nap from one to four.”

“A nickel ain’t worth a dime anymore.”

“If people don’t want to come out to the ballpark, how are you going to stop them?”

“Always go to other people’s funerals, otherwise they won’t go to yours.”