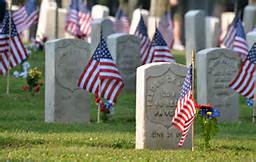 Memorial Day started as an event to honor Union soldiers, who had died during the American Civil War. It was inspired by the way people in the Southern states honored their dead. After World War I, it was extended to include all men and women, who died in any war or military action.

Memorial Day was originally known as Decoration Day. The current name for this day did not come into use until after World War II. Decoration Day and then Memorial Day used to be held on May 30, regardless of the day of the week, on which it fell. In 1968, the Uniform Holidays Bill was passed as part of a move to use federal holidays to create three-day weekends. This meant that that, from 1971, Memorial Day holiday has been officially observed on the last Monday in May. However, it took a longer period for all American states to recognize the new date. Many people visit cemeteries and memorials on Memorial Day. It is customary to fly the American Flag from dawn until noon.

Following President Abraham Lincoln’s assassination in April 1865, there were a variety of events of commemoration. The sheer number of soldiers of both sides who died in the Civil War, more than 600,000, meant that burial and memorialization took on new cultural significance. Under the leadership of women during the war, an increasingly formal practice of decorating graves had taken shape. In 1865, the federal government began creating national military cemeteries for the Union war dead.

Memorial Day is not to be confused with Veteran’s Cay; Memorial Day is a day of remembering the men and women who died while serving, while Veterans Day celebrates the service of all U.S. military veterans.

For further details on the history of Memorial Day see History.com

Go to www.TADPGS.com, click on the “Looking for People” tab, then view “Veterans Solutions” to see more for information on our Veterans Solutions for Employers. Please join our LinkedIn group, Veterans Hiring Solutions for Veterans at http://linkd.in/Sg346w. If you have specific questions about hiring veterans or the incentives for doing so, contact me at  .Marich@Adeccona.com.