The Most Recent Unemployment Report: Good News For Businesses

The Most Recent Unemployment Report: Good News For Businesses

According to the latest government unemployment data released last week, the unemployment rate declined by 0.2 percentage point to 4.2 percent in September. The number of unemployed persons also declined by 331,000 to 6.8 million. Both measures were down over the year. 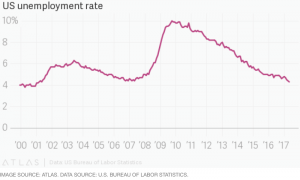 The total payroll employment decreased by 33,000, the U.S. Bureau of Labor Statistics reported. This below-trend growth employment decline was likely caused by the impact of hurricanes Irma and Harvey in Florida and Texas and neighboring states. The storms affected mostly food services and restaurants, particularly in Florida. The impact of the hurricanes made higher-paid workers a disproportionate share of the labor force.

The unemployment rate is at a 43-years low over the past four years, but many low-skilled workers or entry-level job seekers are being “left behind”. The number of suitable vacancies versus those who applied is quite disproportionate, with offered job positions outnumbered five to one. On top of that, youth unemployment remains high at almost 17%.

Even though job growth declined in September, it picked up in October. This month, U.S. companies added the most workers to the markets in seven months, ADP National Employment data shows. The private sector added 235,000 jobs.

The good news is, with record breaking stock markets,  consumer confidence hit the highest level in almost 17 years. Also, the Federal Reserve kept  interest rates unchanged, indicating “solid U.S. economic growth and a strengthening labor market”. It will hold off making any  changes in interest rates until at least December.

On Tuesday, the Labor Department released its latest report about the Employment Cost Index. According to this report, the U.S. employment picked up in the third quarter of the year. Wages and salaries grew 0.7 percent from July to September, and benefits increased by 0.8 percent. Overall, business forecasts remain optimistic.